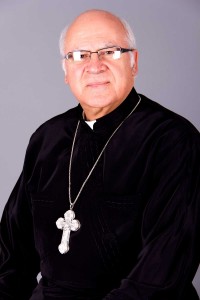 Fr. George Shalhoub was born in Hama Syria to Emily and George Shalhoub, the youngest of 7 children. At the age of 12, he was sent to the Balamand Monastery in Lebanon. Fr. George was ordained a deacon in the Cathedral of the Patriarchate in Damascus, Syria. In 1971, he was sent to the United States. Fr. George is married to Nouhad (Ghareeb) and they have 4 children Lila Zogaib-Lippert and Cameron Lippert with children Andrew and Addison Zogaib and Cameron Lippert, Jason and Andrew Zogaib, Drs. Alex and Melissa Shalhoub with children Olivia, Amira and Nora Shalhoub, Alexa and Marc Nassif with children Sophia and Genevieve and Christa Shalhoub. Fr. George received a Bachelor of Science Degree from Eastern Michigan University in sociology and psychology, a Master’s Degree in Theological Studies from St. John’s Provincial Seminary and a Doctor of Ministry Degree in Pastoral Counseling from the Graduate Theological Foundation. Fr. Shalhoub is an Associate Professor of Religious Studies and Philosophy at Madonna University and a faculty member of the Antiochian House of Studies. He was appointed by Governor Engler of Michigan to serve on the Mental Health Advisory Board and by Governor Granholm to the commission on Arab and Chaldean American Affairs. Fr. Shalhoub was a Teacher of the Year at Madonna University and gave the Commencement Address to Schoolcraft College’s graduating class of 2001. Under his pastoral leadership, Fr. George and a handful of parishioners started St. Mary’s mission in 1972. In 1976, they moved into their new church and in 1990, along with the parishioners, Parish Council, Building Committee, Ladies Society, and the Youth, St. Mary’s was able to build a Cultural Center. Finally, in 2002, St. Mary’s moved into its permanent house of worship, The Basilica of St. Mary Antiochian Orthodox Church where Metropolitan PHILIP proclaimed it, “A new church for a new century.” 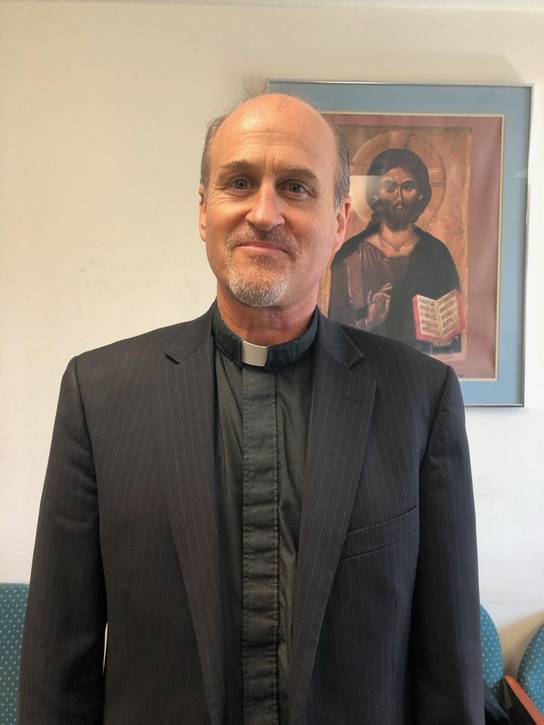 In 1993, Fr. James officially began God’s ministry in youth work as the Assistant Director of the Antiochian Village. While at the Village, he met Audrey, whom he would later marry. Fr. James received his Bachelor of Arts from the University of Nebraska, his Master of Divinity from Holy Cross Greek Orthodox School of Theology, and his Doctor of Ministry from Pittsburgh Theological Seminary.

In 1997, immediately after graduation from Holy Cross, Fr. James moved to Livonia, Michigan with his wife and began working as the Youth Director at St. Mary Orthodox Church under the direction of Fr. George Shalhoub. Fr. James and Audrey had two children, while in Livonia, and moved to Santa Barbara, CA in 2002, where they had their third child. In California, Fr. James worked for the national office of Orthodox Christian Fellowship (OCF) and at The Patriarch Athenagoras Orthodox Institute at the University of California, Berkeley.

In 2006, Fr. James returned to Livonia at the request of Fr. George to take on a new responsibility, the Director of Youth and Outreach Ministry. On Father’s Day, June 17, 2007, Fr. James was ordained to the Holy Diaconate by his Eminence Metropolitan GEORGE Abou Zakhem of Homs, Syria, and to the Holy Priesthood on December 19, 2011 by His Grace Bishop THOMAS Joseph. Fr. James continues to serve the community of the Basilica of St. Mary. He has started many ministry programs, ranging from toddlers to senior citizens, and has found unlimited ways for all parishioners to engage in the spiritual life of the Holy Orthodox Church.

Get Involved with Basilica of St. Mary

You can be an active member of the Basilica of St. Mary Livonia, we welcome all donations and offer a full list of our ministries, to bring you closer to God.

This website uses cookies to improve your experience while you navigate through the website. Out of these cookies, the cookies that are categorized as necessary are stored on your browser as they are essential for the working of basic functionalities of the website. We also use third-party cookies that help us analyze and understand how you use this website. These cookies will be stored in your browser only with your consent. You also have the option to opt-out of these cookies. But opting out of some of these cookies may have an effect on your browsing experience.
Necessary Always Enabled
Necessary cookies are absolutely essential for the website to function properly. This category only includes cookies that ensures basic functionalities and security features of the website. These cookies do not store any personal information.
Non-necessary
Any cookies that may not be particularly necessary for the website to function and is used specifically to collect user personal data via analytics, ads, other embedded contents are termed as non-necessary cookies. It is mandatory to procure user consent prior to running these cookies on your website.
SAVE & ACCEPT
Scroll to Top